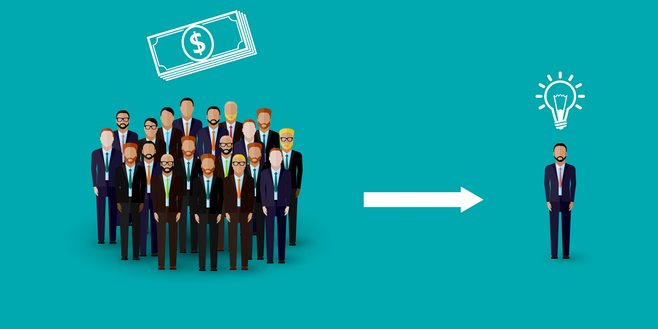 “Crowdfunding is reshaping society’s traditional business model.” So says Tom Vroemen, CEO of CrowdAboutNow,
He was talking at the recent Phare conference and I think he has a point. Crowd financing platforms have been around, in various forms and guises, since the 17th century. The earliest documented case is the Praenumeration subscription model which publishers in Germany used to incentivise book sales. Publishers would offer to sell books that were planned but not printed yet at a discount, to ensure their initial costs were covered in advance.
Nowadays, entrepreneurs and small and medium enterprises (SMEs) are finding it difficult to raise the necessary capital to get their ideas off the ground. SMEs account for 95 – 99% of the companies within a European country, and are the “backbone of all economies,” says Vroemen However, the scarcity of money due to the financial crisis is taking its toll with an estimated 99% of SMEs in the Netherlands being refused loans by banks or other traditional financial investors in 2012.
These striking statistics have resulted in other social funding platforms like Crowdfunding, Kickstarter et al, coming in and filling the void. The digital era, and the benefits that it has brought to the wider public – such as the internet, micro-transactions, forums and IM applications – has meant that start-ups can gain the necessary capital to reach their intended customers quicker than ever before.
Examples of projects being financed by crowdsourcing are in the news with increasing regularity. Crowdsourcing helped finance the first Android-based games console (Ouya). And just recently, the cult US TV show Veronica Mars was made it into a feature-length movie thanks to Kickstarter. It reached its original request of 2 million USD in 12 hours and achieved a record-breaking 5.702 million USD (4.160 million EUR) in total, nearly tripling the original amount asked for.
While the financial aspect is clearly important and rather apparent in these two cases, the emotional connection investors have with the commercial ventures they’re backing is also striking. They want to actively support these projects and don’t want them to fail.
In his keynote, Tom recounted how a small investor of an upmarket wine bar would make a point of going to the bar whenever he was in town. Even though he lived 100 km away, he would often visit and bring his friends along with him. He only contributed a modest investment of €100, yet he felt he had a personal responsibility to the bar’s well-being. As a result, he has spent much more than his original investment and supported it out of loyalty and a sense of ownership.
This goes against the capitalist model. Normally a business should prosper or fail based on its own merits. However, the concept behind crowdsourcing introduces a sense of communal spirit and togetherness into the equation, something that would be unlikely if a venture capitalist or bank invested in the project. This backing, normally from local investors, is helping small businesses thrive within local communities.
I for one like the concept behind crowd financing platforms; they offer the public the opportunity to invest in projects they’re interested in that wouldn’t normally get backed. In fact, crowdsourcing might just be the catalyst that reshapes the relationships between banks, SMEs and communities worldwide, breathing new life into the economy which can only be a good thing.