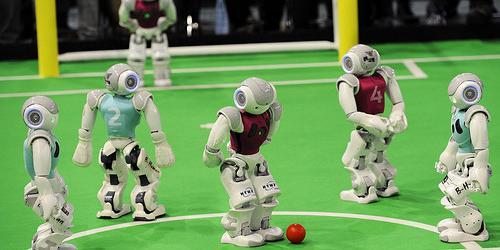 “Welcome to the final of the 2050 FIFA World Cup! And here are the teams – England versus the Robots.”
Sounds hopelessly optimistic? Like something out of a fantastical science fiction novel? But it may surprise you to know there really are people out there who think England could make a World Cup final again.
Oh, you meant the robots. Well robot soccer is already a reality. And in 1997, a group of visionaries launched the RoboCup with the ambitious goal of creating a team of autonomous, humanoid robots that could beat the best human teams – in a real game – by 2050. The 2013 RoboCup was held in Eindhoven at the end of June – attracting over 2500 (human) participants from around 40 countries. 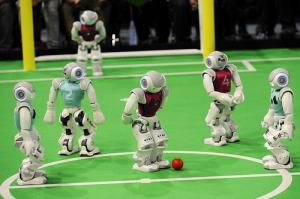 The competition is split across different sizes and types of robot. Game play, teamwork and so forth can be explored in wheeled robots while humanoid ones are still learning how to run and kick. There’s also a Standard Platform League where teams focus solely on software and use (specified) off-the-shelf robots – which look and move like baby Cybermen from Doctor Who.
The smallest humanoid robots at RoboCup are about the size of a two-year old child. Watching their games, I was struck by how similar their behaviour was to that of small children. The way they run, fall over and get up, how they stop and seem to concentrate extra hard just before they try to kick the ball – it was all like watching toddlers play. And the combination of pride and frustration on the faces of the human developers as they desperately encouraged their robots to stop running in the wrong direction was reminiscent of fathers and children in playgrounds the world over.

The robots are our future

Which brings me to perhaps the most exciting aspect of the RoboCup – the way it reaches out to children. When I was there, a number of school and family groups were also visiting. And the children seemed drawn to the human robots. 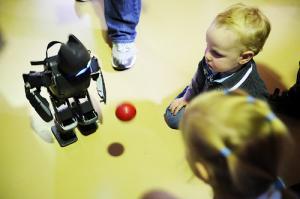 As I watched one small humanoid football match, next to me was a boy about three years. He was absolutely fascinated by the game in front of him – despite the robots spending half the time falling over or having to be reset. The young lad didn’t move until the game was over, when he immediately ran to the next pitch burrowing his way to the front to watch that game too.
Later, I was stood in the Robot Playground next to a robot band that was waiting to perform. The room seemed almost empty until a 2 metre tall robot, looking like something out of a cartoon, started up a riff on its bass guitar. From nowhere, about 50 kids rushed over, crowding the stage to get a better look. One young girl in her father’s arms was so rapt, she couldn’t take her eyes off of the bass-playing ‘bot, not even when she was tapping her grandfather on the shoulder to make sure he was watching too.
I’d like to think that for some of those kids, their visit to RoboCup could spark an interest in robots – and science and technology in general – that will stick with them. Who knows, maybe in 37 years time, that young girl will be the manager that leads out the first robot football team to win the FIFA World Cup.
Photographs courtesy of RoboCup 2013