Behind the scenes at TEDxBrainport

I guess I am a bit of a TED fan. I have seen many TED talks online and have been to several independently organized TEDx events here in Belgium. I am always filled with a sense of wonder at the talks and the speakers who get up there on stage to talk about their ‘ideas worth spreading’ on the subjects of Technology, Entertainment or Design.
But TEDxBrainport was different. This time I was attending as part of the organizing committee. Instead of getting to sit back and enjoy the event, I was going to be busy working. While everyone, from the organizers to the speakers, gives their time for free, we all wanted the evening to be a success. So even though I was looking forward to the event, I had some pre-match nerves.

The first hurdle was overcome when my missing badge turned up and I could actually get into the event. The opening session included talks on artificial life, artificial meat – which is apparently easier to do than life – and walking a mile in other people’s shoes. I was trying to listen to the talks, take my own notes and send out the occasional tweet. I think I managed the first two, but my tweeting was a bit infrequent. 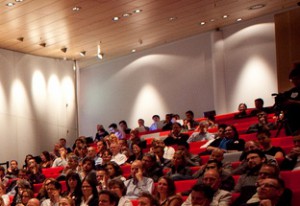 At the end of the first session I was sitting squeezed between two other members of the editorial team who were frantically typing up their notes and waiting for the first of their texts to arrive in my dropbox for editing. It was going to be a long night but at least I got to hear all the great ideas.
Session two started with Gili, a Belgian mentalist, reading the audience’s minds. Phew, not really because according to him it’s all a moneymaking scam. Maybe he was reading my mind. There was also some great live music from Lisa van Nes as well as a brilliant presentation from Sander Veenhof on augmented reality. By the time the second session finished it was 11 PM and I had edited five talk summaries – only fifteen more to go. Did I already mention it was going to be a long night?

By the end of the third session my brain was full with new ideas on lighting, open innovation, science and religion. It was also past midnight, so that might not have helped. I needed sugar and caffeine! Fortunately, the catering was great and I knew where to get some Coca-Cola, and the ‘real thing’ too. We had completed summaries for most of the first and second sessions, but this last lot was going to be a challenge.
I managed to get most of the third session summaries edited during the fourth session, but I think I may have zoned out on some of the talks. And by the time the singing chair came onstage to close the event, I was definitely feeling pretty punchy. The talks finished up at around 2 AM, and although there was an afterparty for those younger or with more stamina than me, I wimped out and took my tired brain home to bed.