Fancy a glass of transparent milk? It could one day be a regular sight on menus and in supermarkets – thanks to a device known as a microsieve and a production technology called 3D lithography.
As the name suggests, microsieves are filtration devices that work at the microscopic scale. Now a team from the Delft Institute of Microsystems and Nanoelectronics (DIMES) in the Netherlands has developed a way to make microsieves so fine, they could filter fat globules in milk until they’re too small to scatter light. Hence transparent milk.
OK, that’s just a light-hearted example – something a dairy company might do for a promotional event. But microsieves have huge potential for food processing. 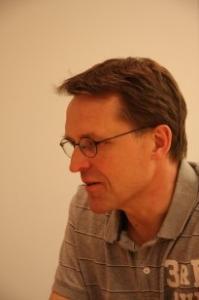 For instance, producers of all kinds of liquids (including milk) need to test or control bacteria levels to ensure their products are safe for consumption. Bacteria-scale microsieves could do this much more quickly and using much less energy than current processing and testing techniques.
“More efficient food processing could help the world avoid food shortages while dealing with impending fuel crises,” says Henk van Zeijl, a member of the Delft team, which is supported through the smart microchannel technology (SMACT) cluster of the Dutch national MicroNed programme.

So how do you create a sieve fine enough to strain the white out of milk or bacteria out of a sample? The Delft team’s answer is 3D lithography.
Lithography is the central technology used to manufacture the millions of silicon chips we use today. In essence, it’s like printing a photo from an analogue camera. You shine a light through the pattern you want to recreate onto a light sensitive material. Then you develop and fix the image. 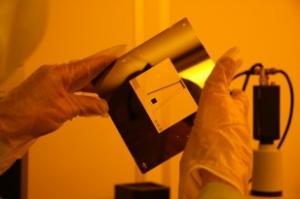 mask (or reticle) and a silicon wafer coated with a photoresist. When light hits the resist, it causes chemical changes that make the resist become either soluble or insoluble in an aqueous developer (depending on the resist material used). By dissolving the soluble resist and etching the silicon exposed, a copy of the mask pattern is transferred to the wafer.
Like photography, lithography is fundamentally two dimensional. The etched pattern’s depth is tiny compared to its horizontal size. Even with the dozens of lithography layers of modern chips, the total depth is still negligible.
This 2D approach is ideal for electronic circuits, and has enabled huge advances in IC performance and power consumption over the last 40 years or so. But it doesn’t work for everything. Applications like microsieves demand 3D.

To move into the third dimension, the Delft team takes standard IC manufacturing techniques and equipment and applies them in novel ways.
Greyscale lithography encodes the third dimension by varying the transparency of the mask. Different parts of the pattern let through different amounts of light. So instead of the exposed resist being either ‘soluble’ or ‘insoluble’, its solubility – and hence thickness after developing – smoothly varies across the wafer. The thinner the developed resist, the more silicon is removed during subsequent etching giving a 3D pattern of varying depth on the wafer. 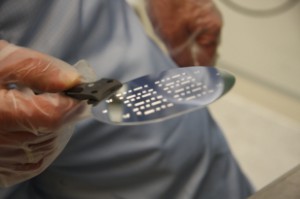 “Today’s lithography tools are like Ferraris that deliver extreme performance on flat race tracks. We’re trying to turn them into Land Rovers. So there’s a lot of work tuning them to handle the ‘off-road’ terrain,” van Zeijl explains.
These exposure techniques transfer a 3D-compatible pattern to the resist. Special etch techniques are then needed to convert that pattern into an actual 3D structure in the wafer. For this, the Delft team uses so-called anisotropic (or directional) etch techniques such as deep- reactive-ion etching (DRIE). 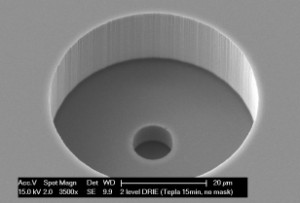 In DRIE, a chemically reactive plasma eats away at the softer resist areas and the silicon below. By pulsing the plasma or keeping the wafer very cold, the etch direction can be tightly controlled. DRIE is already used in industry to create 90° walls on silicon wafers.
However, the Delft team discovered that the etch direction drifts over depths of a few hundred microns. So it has developed enhanced DRIE processes that can etch perpendicularly practically the whole way through the wafer – a thickness of 600 µm or more.

By combining these novel approaches with standard microprocessing techniques, the Delft team has created microsieves with pores as small as 100 nm. This is smaller than the 2D resolution of the krypton-fluoride (KrF) lithography tools they make the sieves on – and smaller than most bacteria.
Microsieves are just one of a seemingly endless list of 3D lithography applications. For example, it can also produce micro-fluidic channels and sensors with integrated electronics. This opens the door to all kinds of lab-on-chip products that could diagnose diseases from small blood samples, detect contamination in water supplies or analyse DNA. Fast and easy to use, lab-on-chips could bring advanced testing and better healthcare to the remotest places in the world. 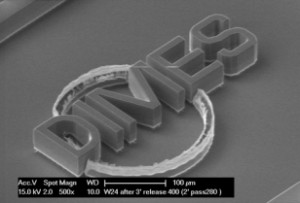 Sensors with integrated electronics could be embedded into all kinds of everyday objects. Think of temperature sensors in paper cups. No more burning your mouth on take-away coffee.
Moreover, 3D lithography could improve performance in standard ICs by eliminating bonding wires. Or enable better, smaller micro-electromechanical systems (MEMS) such as the accelerometers used in rotatable digital photo frames, air bag systems and games controllers. And we’ve still only scratched the surface.
Micro-grippers for manipulating individual molecules, nano-reactors, even satellite micro-thrusters – with 3D lithography, almost anything is possible.
Photography by Hester Regoort, SEM pictures courtesy of DIMES.