Happy birthday to us!

Pyramidion has been trading independently for more than five years. We celebrated this fact on Friday 4 February with a top-secret “Day of Belgian pleasures”. 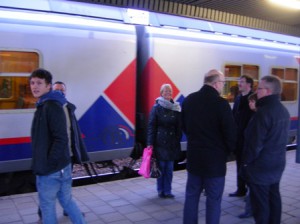 We marked the occasion with a company day out. Only the few people who had organized the day knew what was in store. The rest of us were just told to meet at Antwerp’s Berchem train station. From there, we were taken to the university city of Leuven.
Things didn’t look too promising as we were led on foot out of Leuven’s city centre and past the huge Stella Artois brewery, suspiciously eyeing the grey clouds above. We were walking along a slightly rundown canal when Susan suddenly stopped and announced “We here!”

Working for our dinner 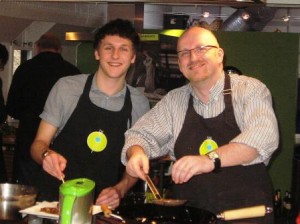 La Coquerie, a riverside cookery school where we were told we would be cooking our own lunch. After a welcome glass of cava, we were taken on a culinary tour of the world including Thailand, Sweden, Turkey, Belgium and the UK.
Our friendly and able guide Natalie explained the recipes and gave us a few words of advice. And then we were put to work. Some were more enthusiastic than starters than others, but within minutes we were all letting out our inner Gordon Ramseys – chopping, slicing, stirring and ripping the heads of prawns with vigour, but without the four letter words!
Maybe it was because we cooked it as a team, maybe it was the wine, but the food was very well received. Even the Brussels sprout soup was a big – if unexpected – success! And only two people had to be treated for cuts and burns.

A bit of Belgian magic

After all that good food, we were led back into town for another Belgian specialty. Again, we didn’t know where we were going until we arrived. This time the surprise destination was the Domus café and brewery, right in the heart of Leuven. 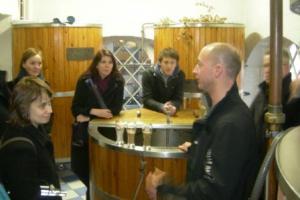 Our visit started with a tour of the brewery, which is housed in a little side street behind Leuven’s impressively ornate town hall. Here, our host Sam showed how, in just two small rooms, they turn malt, hops, yeast and water into the magical substance that is Belgian beer. We got to see all the tools of the trade and the raw materials, and even listen to some beer fermenting away in the vats.
From the brewery, the beer is pumped straight to the café next door – which was our next stop for a spot of team building over a glass or two of Domus’s finest. And very good it was too.
The whole day was a very enjoyable way to celebrate our fifth anniversary as Pyramidion. And we’re all looking forward to an equally fun surprise in five years time. 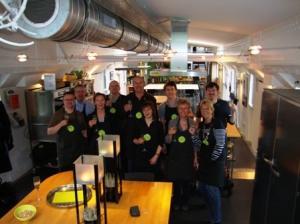